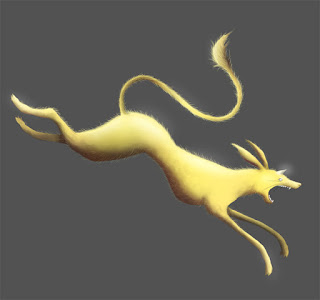 Coherí was one of the first pure species of monsters that inhabited Yibbsa since its beginnings. It is believed that represented the wild side of monsters and untamed creatures.

Back in the dawn of the planet, Coheríes (plural form of Coherí) used to rule a good side of the earth, since they were prolific and good hunters, using their short but sharp horns as a powerful weapon. Being a fast monster, there were few predators for these species, thus, their mass extinction came from species that could stand on their two feet, such as Evoang and human beings., which gave hunt to the Coheríes in order to get their meat and fur.

At the entrance of the new era and thanks to the expansion of other species, the Coheríes were in danger of extinction after running out of preys, corrupted habitats, poaching because of their fur and horns and zoos.

Nowadays, there's nothing left of these species but pictures and documentaries. Many scientists believe that Coherí's DNA is present on many existent creatures like Iquetalas and monsters that share many similarities.
Posted by Aixlen at 2:20 PM No comments: