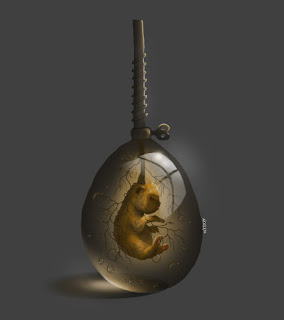 Siamma is the name of an Eriamat egg. It marks the start of the material form of an Eriamat, after the mystical energy, known as Neldis, makes contact with planet Yibbsa.

Sadly, Siammas are not common these days, just like all the Eriamat race; a lot of people think they're from faerie tales, while scholars and sages believe Eriamats and Siammas still exist, hiding from the other races.

Siamma eggs are unique, since they highly react to any living creature and its emotions surrounding it. A Siamma starts it's gestation process at the moment it can feel life close to it. If this kind of egg is alone, the Eriamat won't grow inside, and it will completely stop its formation, without dying.

At the moment the development of the creature starts, the winding key at the top of the egg will start spinning at its own pace, since this is different for every Siamma. After a solid time of thirty exact days, the baby Eriamat can break the shell of the Siamma, or it can take its time to born.

Siammas can contain just one Eriamat inside, showing every aspect and stage of its development. There are rare cases of two Eriamat inside the same Siamma, sharing the same shape, or sometimes being completely different from each other.
The Eriamat's future behaviour and personality can be heavily influenced by the behavior of the living beings surrounding it.

In the extremely rare case the Eriamat dies inside its egg, a completely new energy is created inside, called Makusian. This energy is believed to be so powerful and mystic, that a lot of bounty hunters are after it, thus making the existence of Siammas even more dangerous for its own race.
Posted by Aixlen at 11:50 AM No comments: 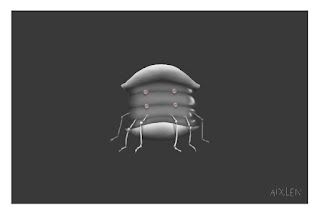 Dedalos are one of the most curious and wonderful insects. While their shells are always colored in a pale white, their bodies stay transparent, making these insects totally invisible.

Dedalo's most impressive feat is the fact that, holding one in your hand and closing its shell, will make you disappear. The latter is useful for this insect in order to escape from their natural predators. The only food a Dedalo can ingest is water, since eating other kinds of food or even colored water, can ruin their defence mechanism, making them extremely vulnerable against anything.

Its almost imposible to find a Dedalo, since they move alone, they are nomads and only move in the night. These kind of insect never makes any specific sound.
Posted by Aixlen at 3:50 PM No comments: 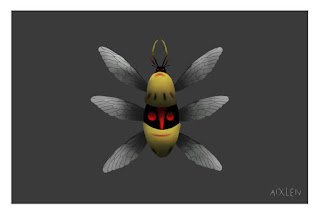 Bletten are highly dangerous bugs than can be seen flying close to sweet food, like fruits, candies and sugared meals.

Since they don't have legs, these creatures fly all their lives, even when taking their food. Their proboscis carries a poison than can be lethal if the Bletten already stung their victim and the red parts reach the target, as the yellow ones can paralyze.

While being so dangerous, Bletten stings are extremely rare, as this kind of bug is the meek type, unless is bothered or hungry for food. Breeders always take great care of them, since Bletten honey is a delicious product, ironically used on most of the food preferred by the bug.
Posted by Aixlen at 5:57 PM No comments: 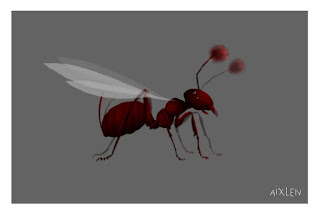 Quomas are one of the fastest insects alive. While these creatures can be easily found outside on Spring because of the fresh air, people have to put extra care in not letting them form a nest inside the houses.

The curious red color of a Quoma is for because of this insect's diet; oddly, it only feeds on red food like apples, cherries and even red objects like clothes. Scientists are still trying to determine if Quomas are fond of human blood because of its color, but it seems this insect just feeds on solids, not liquids.

Quoma can be a very annoying plague, especially for farmers, because of their like of reddish and edible things. Even with its six legs, Quomas are so fast that it can be the equivalent of flies on ground. Its wings are not so good, but it uses them in order to commit high jumps and control the speed of the fall.

The anthill doesn't have a queen, it acts like an unique mind. Quoma's bite doesn't cause any reactions to other creatures, but can be as annoying as a bee sting.
Posted by Aixlen at 6:40 PM No comments: