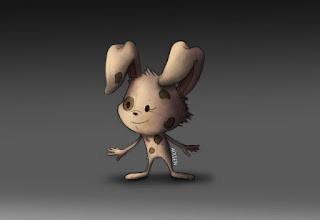 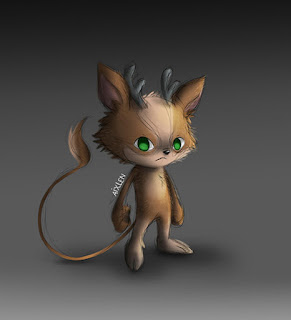 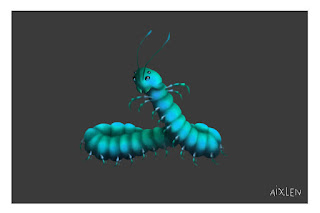 Pelomi are nocturnal creatures, which colors can vary a lot, depending on the habitat and the food the insect is consuming at the time being.

While some kinds of centipede are poisonous, Pelomi lacks of it, but its a fast and tricky creature. Normally, blue Pelomis are more active at night and live close to places with water available, while orange and pink ones appear close to houses and warm places, being active during daytime.

Even if their mandibles look small, these insects can eat hard materials, like wood, and some scientists believe that can even perforate harder surfaces, like iron or glass.

Pelomis can be found all around the year, and is often little children's hobby collecting them due to its different colors.
Posted by Aixlen at 7:29 PM No comments: 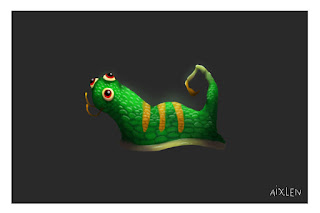 Kanaa are slugs with three eyes, highly smart and dangerous. These creatures can move fast and thanks to their slippery bodies, stepping on them won't kill them.

Kanaa's name comes from the native Attubippu language, and means "venom slug", because of the stinger at the end of it's body. The slug's defenses works as the bee's; once the Kanaa stings a living creature, they loose its stinger and part of its rear with it, causing the insect to lose its innards and finally die.

The venom can cause severe reactions to skin, fur or even bone, since it works as some kind of acid and burns until it looses its corrosion. There are several types of medicines in order to stop this process.

Although being a dangerous slug, Kanaa's slime is surprisingly good at healing plants, flowers, fruits, vegetables and even tree bark, contributing energy to them.
Posted by Aixlen at 2:37 PM No comments: 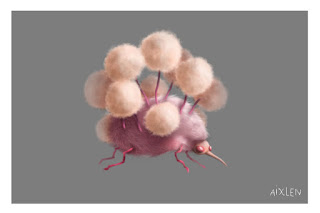 Known as one of the fluffiest and meekest insects of all, Tuttse are peaceful and rare creatures. While is common to find them out in the prairies, some of them can make their nests inside people's houses, looking for comfy clothes, like blankets and pillows nobody uses.

Despite its spiky proboscis, Tuttse can't sting or even ingest any food; they only need their proboscis, to smell and trace possible dangers against themselves.

Tuttse’s cotton balls are actually its eggs. These insects are always searching for lint on clothes in order to stick them to its body and thus, keeping its future offspring warm. Despite being an insect, they are not considered as a plague or as an annoying creature to have around, mainly because they are hard to spot (thanks to its shy nature, they are always hiding) and because they don’t leave any trace or harm their habitats.
Posted by Aixlen at 1:05 PM No comments: 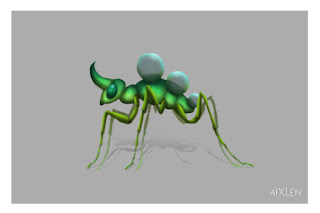 Alabelos are tiny and curious insects. They are always exploring the environment, looking for warm places where to start a nest.

Is known as one of the noisiest insects in the world. The bubble-like spheres that Alabelos carry on their backs are their way to protect themselves and call to other Alabelos. These spheres are known as 'scream chambers', and they can release an annoying and sharp noise, often fatal for smaller insects that are close by.

Is normal to hear that noise on Spring and Summer, since Alabelo performs it in order to scare its predators, or to call to their mate. The horn at the top of their head serves as a protection and for leaving marks on some places, thus telling other insects that that's Alabelo's territory.
Posted by Aixlen at 12:10 PM No comments: